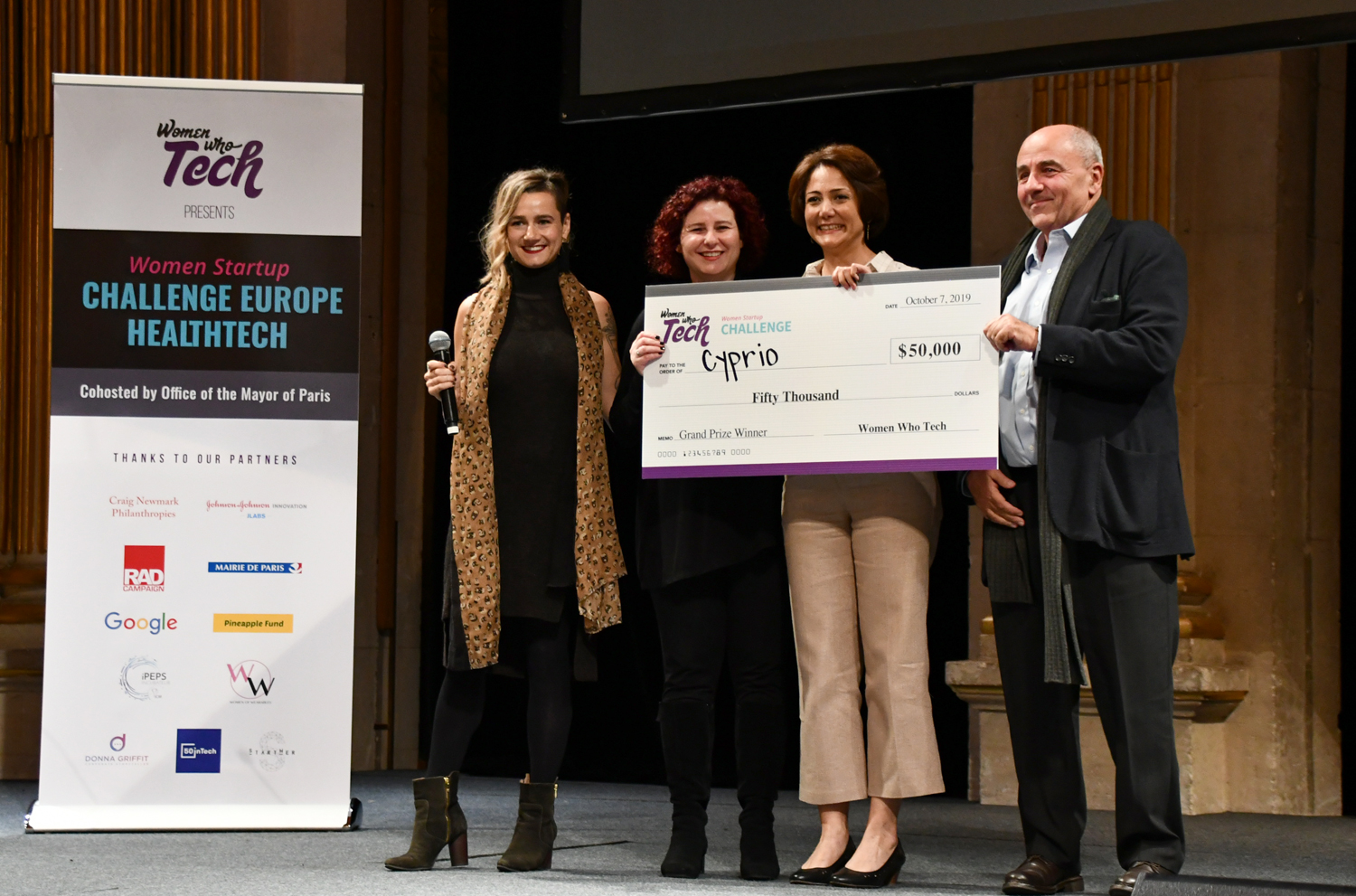 WASHINGTON and PARIS — Cyprio is the winner of Women Who Tech's European-leg of its flagship Women Startup Challenge and will bring home an equity-free $50,000 cash grant. The Paris-based company is redefining predictive research tools for drug and toxicity testing in the human liver.

"Women Who Tech is shaking up a culture and economy that's made it exceedingly challenging for women-led startups to raise capital. We're thrilled to award the grand prize to Cyprio who is revolutionizing the tissue engineering field so more patients waiting for liver transplants will survive," said Allyson Kapin, Founder of Women Who Tech.

Noushin Dianat, CEO and Co-Founder of Cyprio, commented: "I am so grateful to the jury, JLABS, and Women Who Tech for their support to the pitch process, and to the Mayor of Paris for organizing the event. The prize is so meaningful to me for the recognition it brings to women-led companies. I truly appreciate what Women Who Tech does to help normalize the culture of being a Founder and a woman."

By 2040, $25 trillion will be spent annually on healthcare, yet only 9.7 percent of investor funding goes to women-led healthtech startups. The Women Startup Challenge fosters a culture and inclusive economy to accelerate women founders who are developing solutions to the biggest health problems directly impacting people's lives.

"The high quality of all the 10 companies made it a difficult contest to judge, but we have a great awardee that deserves this recognition and support. At Johnson & Johnson Innovation, we see inspiring innovators and entrepreneurs working on breakthrough solutions aiming to make a difference for patients and consumers around the world. Cyprio is one of them, and we wish them all the success for the future", said Sarah Fisher, Senior Director, Global Markets, External Innovation, Johnson & Johnson Medical Devices at Johnson & Johnson.

"Noushin Dianat, founder of Cyprio, won the $50,000 cash grant. This prize will finance research and new tools to reproduce the architecture and physiology of the human liver and better predict human responses to drug treatments. I'm happy for her and for all the women who, like her, take risks every day, create their startups, raise funds, and inspire others," said Jean-Louis Missika, Deputy Mayor of Paris.

The other finalists included:

About Women Who Tech

Founded in 2008, Women Who Tech is helping to draw global attention to the significant gender bias in venture capital funding. By showcasing women-led ventures through Women Who Tech's flagship Women Startup Challenges, the nonprofit provides capital, mentoring, direct access to leading investors, and other resources for women who are creating the most innovative tech companies, with the ultimate goal of closing the funding gap for good.

The Women Startup Challenge is one of the largest global programs with a pipeline of over 3,000 women-led startups. The organization showcases and funds women-led tech startups, hosting thousands of women innovators across the world. For information, visit www.womenwhotech.com.

Johnson & Johnson Innovation—JLABS is a premier life science incubator program, and a global network of open innovation ecosystems, enabling and empowering innovators to create and accelerate the delivery of life-enhancing health and wellness solutions to patients around the world. As a leader in innovation, JLABS helps entrepreneurs in pharmaceutical, medical device, consumer, and health tech bring healthcare solutions to patients and consumers. Read more >>